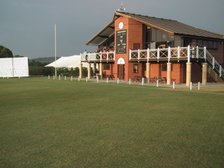 Sad news of the death of former 4th XI captain

It is with much sadness that the club has learnt of the death of vice president Andy Sloman. Having battled pancreatic cancer for more than two years he died in the early hours of yesterday morning.

Andy was an underrated wicketkeeper/batsman who captained the 4th XI for a good number of years in the 1990s and 2000s. He will be especially remembered for the way he introduced and gave young players the confidence to play senior cricket including a number of current players. On hearing the sad news Toby Wastling, who played his first league game under Andy in 2000, said 'He was great at introducing young players to league cricket. He always made sure they got a game and weren't there just to make up the numbers.'

He will be missed by his many friends in the club.